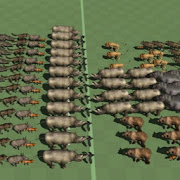 Description :
Animal Epic Battle Simulator – a strategy in which players design different situations on the battlefield between groups of animals. From the smallest to the giant. Birds, wolves, bears, elephants and so on. Each unit has a certain price. This requires careful planning of all further actions in order to develop victorious tactics and the position of the “soldiers” in the ranks. Well, after that you can start the process and enjoy the sight of an epic confrontation. The success of the operation will open up new opportunities, locations and characteristics of what is happening. Which won’t leave you bored for all fans of the genre.

There are angry animals in the forests and African deserts. They are fighting for supreme leadership of the forests and deserts. So It is your duty to help your team to gain control in the battle in this free epic animal battle simulator game.

There are 11 animals so far. They are crow, seagull, lion, wolf, fox, bear, crocodile, rhinoceros, hippopotamus, elephant and boar. Place them accurately and cleverly. They all have different power, life, stamina and speed. So check them and use them wisely.

There are 36 battles so far. 18 in forest and 18 in desert. You will firstly, deploy your wild animals based on their prices and your gold. Check enemy and after all of them, start battle. If you win the battle you can simply pass to new level and play it.

For any questions, please contact us.
Ladik Apps & Games Team