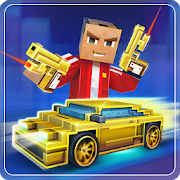 5..4..3..2..1.. Welcome to the modern arena where fast cars, sniper duels and fun bandits war at every turn! Look sharp, shooting is everywhere, there are almost no rules on these streets. Discover a lot of interesting missions about gangsters and cops, bangs, mafia and police. Get ahead of other hunters for coins, weapons and ammo you can find around. Creative ways of fun and action – that block city might need a little destruction to shake things up. We’ve made everything for fans of tough 3d battlegrounds – plasma guns, destroyer, super rifles, a lot of armor types and many other exciting things, you should try out!

Accomplish impossible ops given by mafia bosses, where critical goals depend totally on you! Drive awesome cars, parkour and escape from police.
Bad guy or hero, adventures are waiting for you. Take your pixel gun and go to the Block City!

"It’s time to defend our planet from invaders in 7.1.4 update!

(The season will begin after the end of the previous one)

- Lower prices for all item categories

- A lot of bug fixes and optimisations"