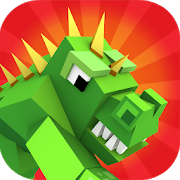 Smash the City to pieces with a line up of legendary monsters! Punch down buildings, smack down skyscrapers, bash houses to bits! The police, SWAT, and the army will try to stop you causing maximum destruction! Battle APCs, tanks, helicopters and more! How much City can you SMASH?!

Take control of a giant Ape, Lizard, Wolf, Spider…even a Penguin and a Giant Bunny! Take your highest scores to the leaderboards and beat your friends!

FEATURES
– Over 50 Monsters to unlock and wreck havoc with!
– Monsters have different strength and skills, find your favourite!
– Take each monster into RAMPAGE mode, become indestructible, SMASH EVERYTHING in your path!
– A huge randomly generated endless city for you to destroy!

Stick around because a new update is coming that will introduce a range of Dragon to the city! 🐉

While Smashy City is entirely free to play the monsters can be purchased for real money. If you do not wish to use this feature please disable in-app purchases in your device’s settings.

Play the best Monster game on the app store! And Smash every city in your path! Hatch giant monsters and activate your Rampage!

Reduced the amount of Video ads that can interrupt gameplay!

We've added a new tutorial into the game to help users who were struggling with the controls and optimised some of the city so you can destroy more than every before!