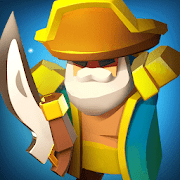 The age of dark empires have come to an end, it's time to recover what rightfully belongs to us, it's time for revolt, war and revenge!

The warriors claim your name, lord!

✔️ Fight against the Black King in a campaign through the realm.

✔️ Merge units to become the strongest King and conquer the world.

✔️ Grow fast! Conquest game with many upgrades to develop in your city.

✔️ Defend your village with a multitude of cannons, archer tower, traps...

Lead your army to the eternal glory in this epic game.