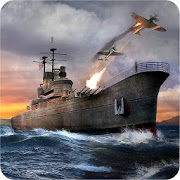 Naval Warship: Pacific Fleet [Varies with device] updated on Saturday June 6, 2020 is the Strategy for Android developed by Artik Games

It’s 1951, World War 2 was lost by everyone and won by nobody. The use of nuclear warheads has left the entire world in shambles. All the major countries have crumbled, governments are not in control anymore and most citizens have gone rogue.

In Naval Warship : Pacific Fleet you’ll command your naval fleet in a post-apocalyptic world where there’s only a small area left on Earth untouched by the events of WW2. This promised land lies in the Pacific and contains a group of islands which are still intact and are being fought for by all major countries.

They all want control of this territory because it offers a chance to survive and rebuild everything that has been lost in World War 2.

You’ll play the commander of a stranded group of survivors on a small Pacific island. Your task is to dominate and expand your settlement in order to become a new Naval force to be reckoned with.

Features:
✪ Build and expand your own navy base
✪ Collect a variety of warships, destroyers, cruisers and submarines from WW2
✪ Fight enemy battleships with various weapons. From canons to torpedo’s and airstrike
✪ Reign the Pacific seas with beautiful graphics and scenery
✪ Take control of your battleship and fight epic naval battles