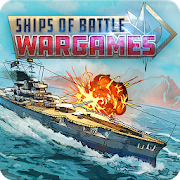 Description of Ships of Battle: Wargames [Varies with device]

Ships of Battle: Wargames [Varies with device] updated on Wednesday September 30, 2020 is the Strategy for Android developed by Artik Games

Ships of Battle: Wargames is a futuristic strategy game full of action and adventure with a unique 2-sided story about an alternative outcome after World War 2. With no real winner, destroyed lands and faded borders, two factions were formed to continue the fight. Upgrade your fleet, build your base and test your wits in strategic battles against your enemies to become the ultimate ruler!

The game has lots of vessels based on authentic World Wars, western and eastern battleships ranging from gunships to flight carriers for you to control and upgrade, each with unique stats to use in calculated moves. These different type of ship designs will represent the military forces of the undaunted Union and the disciplined Empire.

Your military base will be the starting point from where you control everything. From there you will take on new enemies and gather what you need to make your base the strongest in the world. Upgrade your base to its full potential and it will offer everything you need to build an invincible fleet and conquer the world! Build a strong line of defense against enemy attacks on your own base and protect what is yours!

-Receive rewards for playing daily!
-Develop new technologies and use resources to build structures and weapons
-Unlock and upgrade gunships, artillery ships, carriers, and heavy defense ships to create a fleet to be feared. (and more to come!)
-Use your strategic skills in live raids or send your fleet on a mission.
-Collect cards and build a strong deck full of epic battle skills!
-Defend your base against enemy attacks! (Multiplayer coming soon!)
-Raid enemy bases for glory and rewards
-Pick a side: join the Union or the Empire and learn their story..(coming soon)
-Discover areas on the worldmap for new challenges and goods! (coming soon)

Available in this release:

Whats new of Ships of Battle: Wargames [Varies with device]

Workers added to the store