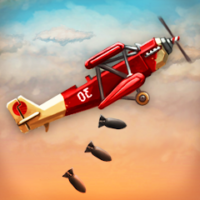 Aircraft Evolution [] updated on Saturday January 7, 2023 is the Arcade for Android developed by Satur Entertainment

Fight through 4 time periods, from the era of the First World War to futuristic battles.
Level up and evolve your aircraft from a wooden plane to a fighter of the future.
Then, refine it by increasing its armor, fuel, speed, firepower and much more.
Choose from a large selection of aircraft. You upgrade as you go, but you can still try to take on a tank armed with plasma cannons using just a wooden plane!

40 different missions are waiting for you. You will be given different objectives; destroy an enemy base, deal with waves of attacking fighters, boss fights and much more.
In preparation for battles, you can buy increasingly dangerous bombs. Demolish the enemy with standard bombs, a barrage of cluster bombs, or burn enemies to ashes with napalm.
Bomb the enemy. Turn their bases into smoldering ruins and the battlefield into a scorched desert.
Bombs and explosions! More bombs and explosions!!!

Buy yourself a military plane and fly into an air battle!

A game about aircraft with military equipment and beautiful graphics for the passage of the campaign:
Complete 4 eras – World War I, World War II, modern conflicts and futuristic war of the future.
Explore the level map, pick up loot. By looting you get bombs, napalm, cluster bombs, repairs and fuel.
A variety of locations: forest, arctic, desert, tropics – all with careful rendering and a unique atmosphere.
Various missions! Destruction of the enemy, race against time, fights high in the sky, battles with tanks and of course strong and difficult bosses!