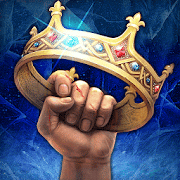 Description of Heroes at War [120]

Heroes at War [120] updated on Wednesday June 10, 2020 is the Strategy for Android developed by Apex Point Games

Welcome to the world of heroes! The world of magic and courage, of wise warlords and artful villains. This is where mighty warriors fight against creatures spawned by ancient witchcraft. Here you can become a great ruler who will lead an army to conquer new lands to prove who is most powerful to players from all over the world! Restore your ruined castle, and restore the former grandeur of its inhabitants and the brave soldiers who once defended it. Join a military alliance with other players and take part in campaigns to rise to fame as the greatest warlord in the world! Keep in mind that a wise ruler cares not only about military greatness, but about agriculture, science, the training of their soldiers, and diplomacy. You will see all the above-mentioned things in Heroes at War. You can play and reach dizzying heights of accomplishment in Heroes at War absolutely for free! But if you want to speed up your progress and get some necessary items without having to wait, you can buy them for real money. Game Features:
– Turn-based strategy game
– Free-to-play
– Fascinating graphics
– A large selection of units for army creation, ranging from guards to battle mages!
– Battles against real players
– Battles against ancient creatures on the world map
– An opportunity to create weapons and upgrade your hero’s skills
– An opportunity to become the head of a military alliance
– VIP status!