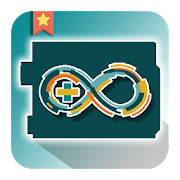 Description of Arduino Bluetooth Controller - All in One [3.1]

Arduino Bluetooth Controller - All in One [3.1] updated on Sunday June 7, 2020 is the Tools for Android developed by Apps valley

Do you want to control via bluetooth the Arduino project you built?
Let your Android device be a remote control for any micro-controller with a bluetooth module.

Run the app, search for your bluetooth module and connect. Once you are connected you will be able to send your own commands to your Arduino board using the keyboard or some fancy buttons

-> REMOTE controller to control cars,vehicles and other related devices.
-> DIMMER can be used to high and low the brightness of the leds or the speed of any devices.
-> TERMINAL is used to send any commands using phone keyboard.
-> ON/OFF Buttons are very basic things to use in arduino to test your devices and to make it work perfect.
-> VOICE Controller is also available to ease your life.
-> TIMER is used to set Time duration to ON / OFF the device and show the countdown timer.

***OTHER FEATURES OF ARDUINO BLUETOOTH CONTROLLER****

-> REMEMBER/FORGET DEVICE: Set your device “remembered” so the app will quickly connect automatically next time to the same device. and wise versa.

-> APP CONFIGURATION: configure your app according to your need i.e send the command which you have coded in arduino device.

-> ARDUINO SAMPLE CODE: The Arduino SAMPLE code in C++ is provided in each feature/section of the app so don’t have to worry about the code at all. You can find it in the Menu easily.

FEEDBACK:
Your Feedback Matters. THANKS!

Whats new of Arduino Bluetooth Controller - All in One [3.1]