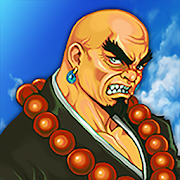 The king of famous shooting game, Tengai the second episode of Sengoku Ace.!
Tengai confirmed the popularity and interested by beta test, is officially released!
Enjoy Tengai, you loved at arcade shooting game your smartphone.
Experience a fantastic adventure to save your princess in the age of war!
Fall into a fantastic war adventure to save your princess!

check out special features on Tengai
▶ from low-end phones to tablet support, supports five different languages​​!
Supports most phones. List of people around the world and enjoy the competition.

▶Easy to control
Control as you used to at an arcade.
Offering a control system capable of fine adjustment.

▶Unique six characters
Fight your enemy with unique characters such as Samurai, Ninja, Shaman and so on.