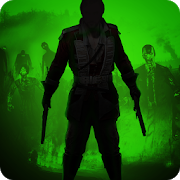 It’s a zombie war game made more thrilling and intense for gamers with a true combo of classic fps and timeless racing game. World is facing zombie phenomenon! As a top agent of a secret military ops team with code name black you must save citizens from the 3d world of zombie phenomena!

Get behind the wheel and survive the waves of monsters! Your car is racing on highway drifting through traffic to pick up your daughter from airport. But as you drive into this 3d world gaming environment, everything is blanketed in darkness as horrifying nightmare comes to life!

Zombies have taken over the whole city in this 3D world of action-adventure survival horror game!

They are evolving fast and becoming more dangerous in this post-apocalyptic fps environment! Your daughter is trapped in an airport; you are her only hope! You must take down whole crowd in this war against monstrous zombies. Clear roads using lightning-fast top military fps agent action skills and race forward in your super cool racing car to save her in this free online action-adventure survival horror game. Accelerate to full throttle to get to your destination on time!

To assist you in surviving this fps war in combat, gamers can use long-range weapons, such as rifles, shotguns, and short-range weapons such as handguns. Unique features such as keeping players thirst and hunger in check are also included to make this game more realistically intense! Collect ammo and eating items by scavenging throughout the environment.

- Pistol has more bullets in a round