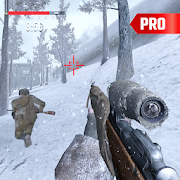 Answer the call and show your sniper skills in most dynamic warfare on battleground against rivals from world war 2. With each passing year war games have evolved, and so should your shooting skills by playing these best world war games. This is one of the best sniper games you are going to experience.

We proudly present to a new take on best shooting games. Army games lover will be excited to play in unique historical ww2 environment with modern and advance controls.

This pro version is the answer to your call for more thrilling action-packed survival challenges that will pit your sniper aim and shooting skills to test! Unleash your fury as the brave commando and do your duty to attack with surgical strike to be victorious in free battle royale mode.

As a first person shooter grab your sniper rifle and shoot your way to the enemy base in the solo campaign. Optimize your gaming experience of shooting games in new environment with real life feels. Survive through one dire situation after another in world war 2 to save the world from enemy army.

Become a Legend in historical warfare

Engage in online fps battles to become an ultimate battle royale commando in one of the most epic guns a blazing mode and impress your friends with your expert sniper shooting skills. Gather elite squad from your military camp and engage enemy army in fast-paced story missions. Call best strategy to defeat enemy troops in final battleground that will result in survival of many army soldiers of world war.

With sharp controls enjoy impressive graphics on mobile and create a legend in one of the best sniper games ever made. And you don’t need wifi to play this amazing new warfare game with spectacular fps missions.

All the weapons from world war 2 games are available and at your disposal. You just need to upgrade your weapons after completing each mission. Use the whole arsenal featuring historic weapons from ww2 such as sniper rifles, machine guns, anti-aircraft, grenades, shotguns, bazookas and many other to do your duty to defend all the frontlines of your country.

Features of Call of Sniper World War 2 WW2 Final Battleground:
– No Ads
– World wide war missions and modes
– Realistic graphics with different locations from historical event on map
– Strategic gameplay will ensure your victory in this warfare
– Amazing fire and shooting effects with synchronized intense sound effects
– Flexible AI based enemy with unique abilities and situations
– Variety of weapons available without the need to unlock each gun