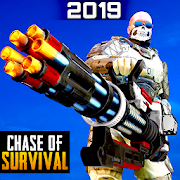 Let's chase the battle of survival with intense combat. Fire endlessly to shoot the enemies down to death. Win the survivor trophy with 3 lives to survive on battlefields. Chase of survival is a realistic action shooter on mobile.

Fight in the shrinking zone with shooter skills and tactics to be the last man on the battleground. Experience the intense shooting in best FPS action multi player war.

Play in different modes like death match, team death match and our special classic mode to enjoy the endless action. Choose your game mode and land into different environments in both online and offline ways.

Shooters can strike opponents individually or by teaming yup with their friends worldwide.

● Drive into wide variety of vehicles like cars, trucks to hunt your rivals.

● Smart AI system to give the real player experience.

● Ability to create your private room and play with your friends.

● Ultimate levels to conquer with amazing prizes in Chase of survival.

● Explore new and immersive maps to equip yourself with most powerful armory.

So, Be a shooter survivor in the whole journey of chase of survival. Fight for yourself in order to survive till end and gain the victory of epic shooting battle.

Download and enjoy the intense action war of the battlefields.