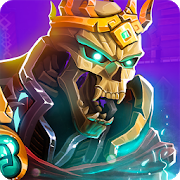 Help your people! Join the fight against the Skeleton Boss, and become the best hero in the dungeons.

Live a real adventure with this online Action MMORPG game. Enjoy Dungeon Legends for free, and discover an endless world of battles, quests, and epic creatures.

Adapt your hero to your gameplay. Turn your Dwarf into an epic warrior, a healer, a hunter or a protector. Train your hero in the adventure quests, and fight other heroes in the online pvp multiplayer arena.

🐲 BUILD YOUR OWN ADVENTURE
It was a long time ago, but Dwarfs remember the Skeleton Boss. He attacked the villages with his army of goblins, skeletons, trolls, and balrogs. But Dwarfs do not surrender, they fear nothing, and they cooperated to hunt their enemies, and battle that army.
Dwarfs defeated the Skeleton Boss, and force him to hide in the ancient Dungeons.

Now, the Skeleton Boss is back.

He is summoning an army to leave his prison, and take revenge on the Dwarfs.
The Skeleton Boss is waiting in his throne, deep in the Dungeons.The only hope for the Dwarfs is to find him, cooperate, and hunt him before he recovers his power.

🔮DISCOVER AN ENDLESS ADVENTURE RPG GAME
Each quest in this Action RPG is unique. Unleash your arcane powers, and hack and slash the evil creatures with a good strategy to obtain legendary rewards. Hunt the evil in the campaign or take part on the multiplayer battles onlines.

⚔️ FIGHT IN THE ONLINE MULTIPLAYER ARENA
Fight epic PvP battles with other heroes, or the online multiplayer modes. Enter the arena alone or with friends, and prove you are the best evil hunter in the dungeons.

🏆 PARTICIPATE IN PVE/PVP EVENTS
Help your fellows dwarves in the PvE events, and compete with them in the PvP battles. Each week there is a new opportunity to prove yourself as the best dwarf.

If you are looking for a new hack & slash game and mobile action rpg game, this mmorpg adventure game will be your new favourite RPG, action MMO, online RPG, and PvP game. Will you be the best dwarf? Be prepared for amazing boss battles, legendary online PvE quests, coop multiplayer levels full of action, and a new world full of arcane magic.

Please note:
– This epic MMORPG game is free to play, but in-apps items can be purchased with real money. To restrict in-app purchases adjust the settings on your device.
– Dungeon Legends is an online ARPG game, and requires an Internet connection to play.