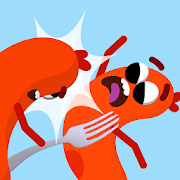 Sausage Wars.io [1.4.6] updated on Tuesday June 2, 2020 is the Arcade for Android developed by Crazy Labs by TabTale

Battle time! Careful – it’s a hot-dog-eat-hot-dog world out there. So fight to the death, till your enemies are oozing ketchup!

The infamous sausage is back, and all that dying has made him just a tad power-hungry and ready to fight, fight, fight and smash, smash, smash! Help him fight and kill all the other sausages till he’s the last dog standing and the master of the sausage wars io battle arena!

Tap and hold to move your sausage around the sausage wars battle arena.
Release to head-bang and push enemy sausages into sausage wars io battle obstacles like sharp tools, kitchen sinks, garden fire, or off the counter to their doom. Fight and smash those sausages to smithereens!

Don’t forget your hot-diggity-dog victory dance at the end of each sausage wars io battle level!

“To opt out of CrazyLabs sales of personal information as a California resident, please visit our Privacy Policy: https://crazylabs.com/app”