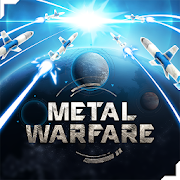 Metal Warfare [1.3.5] updated on Thursday June 18, 2020 is the Strategy for Android developed by ctmlab

A top 2nd Award-Winning Strategy Game ML-Agents Challenge, Metal Warfare is really one of the most addictive strategy game 2018.

Let’s get ready to step into the space war of Metal Warfare - Real Time Strategy game (RTS) on mobile. Be a General, join the battle of worldwide players, build and defend your base with a lot of Air Force, Ground Force in high level structures and weapons.

Explore the art of space war is so easy with Metal Warfare game. Players can get started with Air Force using Missile Launcher to attack enemies and build Anti-Missile, Anti-Air Missile to protect your base from enemies ‘s attacks. A lot of more building, structures and weapons will be unlocked in higher levels. Build smart and attack clever to win, you need to hurry because enemies base will growth really fast and keep improving their tactics.

● Defend your base with a multitude of Structures, Building, Weapon, Air Force, Ground Force…

● Join the global contest to be on top.

● Upgrade your main building, weapon and improve your skill to defeat all of enemies ‘s base.

Build and Lead your base to victory!