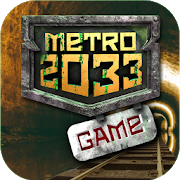 Metro 2033 Wars [1.91] updated on Sunday September 13, 2020 is the Strategy for Android developed by DaSuppaStudios

Some say the Single Player games are dead. We will prove it’s not!

Are you ready to enter dark and dangerous tunnels of post apocalyptic Metro?

This game is about Adventure.
It’s not only a game, it’s a book, it’s a trip! More than 500 hundred of pages were written for the game, supervised by Dmitry Glukhovsky, the author of Metro 2033 Universe!

This game is about Survival.
Nor mutants, nor bandits, nor Red Army, nor Reich will give you a chance to relax.

This game is about Battles.
Turn-based chess-style battles will open your talents of a Great Strategist.

This game is about Troops.
What is your ideal squad? Heavy armored mutants with fire support of a sniper? Or a high-level priest that will not allow your enemies even to take a turn?

This game is about Economics.
It’s always hard in the beginning. But when you’re rich enough, you will be able to hire army so tough so you can go against most powerful enemies!

This game is about Diplomacy.
The way of the fist may be the wrong way. Why not to try the way of the diplomacy? Not to fight the enemy but ally with him?

And of course this game is about PvP!
You are tired of fighting and exploring? Why not to PvP against your friends?

The Third World War started and finished in few hours — States have exchanged nuclear strikes and the civilisation fell. In the universe of Metro 2033, contrary to the theory of assured destruction, several thousands of people managed to survive in a maze of underground tunnels. We organized community and microstates, with arms fighting among themselves, and fighting off constant attacks of mutated flora and fauna. You — one of the survivors in search of immortality.

The game is made under licensing agreement and supervision by Glukhovsky, the author of Metro 2033 universe.

This update affects Metro2 only so Metro1 users can skip it for now.