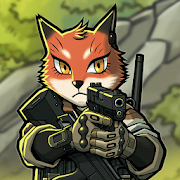 [Caution!]
* When you delete the game, the saved data is also deleted.

+ Kill Zone difficulty has been lowered.

+ The loading screen image has been changed to appear in various.