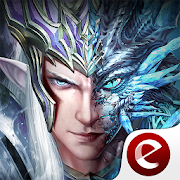 Description of Awakening of Dragon [2.7.2]

Awakening of Dragon [2.7.2] updated on Sunday January 2, 2022 is the Role Playing for Android developed by EFUN COMPANY LIMITED

The most anticipated AAA mmorpg AOD is live in SEA! Login now to get B.diamond*5000 and abundant epic weapons and other surprising in-game packages! limited time mount and superior servant is waiting for you!

Millenia ago, Demon King Baal led the demonic horde in an invasion of the Divine Realm. Battle after battle the gods suffered defeat, and the destruction of the Divine Realm was nearly complete. In order to save their last remaining hope, the 7 Divine Dragons ripped a hole in space-time and travelled to the harmonious land of Arcus. There they use their abilities to create a new world and 3 races, humans, elves and dwarves, who lived under the protection of 4 Divine Dragons.
As time passed, the power of the Divine Dragons began to wane and the demonic horde traveled to Arcus through the hole in space-time to destruct this land. Only the Chosen One can possess the Dragon Crystal and awaken the power of the Dragon Soul. Only then can the demonic horde be defeated and Arcus saved.

[Game Features]
– Double form transformation; awaken the sleeping Ancient Divine Dragons
In [Arcus], dragons represent absolute faith and power. Legends say the proud dragon never once bowed its noble head, until the Chosen One appeared before it with the Divine Dragon Crystal. Ice, Fire, Light, Dark, Life, Time and Space: unlock the 7 Dragon Gods with our innovative Transformation system. Transform into a dragon and rapidly dispatch your enemies with exhilarating game controls.

– Switch between melee and range classes at will
Forget the traditional warrior, mage and archer classes. Be an archer who morphs into a melee Divine Dragon to face the enemy head on, or a warrior that transforms into a Mage Dragon to bombard the enemy with spells from afar: the Divine Dragon Transformation System completely overthrows traditional class systems.

– Dragon Conquest, SvS Dimension Battle
In our innovative [SvS World War] gameplay, players must battle other worlds as they fight for their own in this intense, massive multiplayer battle experience. Server vs Server, Army vs Army, World vs World. If you don’t want to submit, then pick up your weapons and fight to the death!