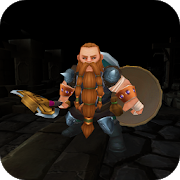 Treasure Hunter: Dungeon Fight is a top down slasher game with tons of levels. Explore dangerous dungeons, find treasures, and fight with monsters!

Choose one of three heroes, each with unique fighting styles and magical abilities. An immortal warrior who owns a large, two-handed sword. His archaic plasma magic has been forgotten but he easily blasts through monsters as he glides from level to level. The ancient viking warrior who is fast and has a shield for additional protection. His fire magic has no equal as he torches his way through the dungeon. The barbarian huntress uses daggers in combat and her thunder magic is incredibly powerful. She is very fast and will suit those who prefer speed.

Features:
– three heroes to choose from with unique characteristics
– many enemies such as goblins, golems, bears
– Up to 50 labyrinth levels
– colorful graphics in cartoon fantasy style