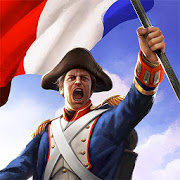 Grand War: European Conqueror [6.7.2] updated on Thursday January 27, 2022 is the Strategy for Android developed by JOYNOWSTUDIO

“I shoule have conquered the world.” - Napoleon Bonaparte

Your Excellency, Commander! Welcome to the 18th century, the Age of Napoleon.

Grand War: European Warfare is the newest grand strategy games and fast-play tactical war games set during the turbulent time from Great French Revolution to Battle of Waterloo, where you take the role of famous generals for each major nations, Napoleon, Duke of Wellington, Nelson, Blucher, Kutuzov, and other military geniuses will follow you to dominate the entire world.

Your troops have been assembled, start your games now! Use your wisdom and war strategy to put an end to this chaotic Europe!

A new order is coming!

Hex strategy games in the Napoleonic era, with Napoleon, Nelson, Frederick II, and Kutuzov to fight in Europe.

French old Guards, Prussian Heavy Cannons, British Dragoon, as well as Polish Spear Cavalry, Highland Infantry, Breastplate Cavalry, dozens of historically famous troops. Each troop has its own characteristics, recruit them into your regiment and build a conqueror troops.

- Resource production, town building, soldier training, strategy is up to you.

- Recruit generals, who have unique commanding ability and can control the outcome of the battle.

- Direct troops, they will accompany your conqueror career. Please upgrade their level.

- 50+ levels where you can command famous historical battles of different periods.

- Different seasons and weather changes, this is the real military games.

- Engineer system, you can build combat fortifications on the battlefield at any time.

- Mutual restraint and formation coordination of cavalry infantry and artillery.

Grand War: European Warfare is a turn-based hex war strategy games, which truly reproduces the civilization of battles in the Napoleonic period, allowing you to compete with these European historical conqueror!

Massive historical civilization events, fight through battles of the 19th century, with massive armies colliding in varied types of terrain.

Victory in most battles will go to the commander most able to utilize the combined arms benefits of infantry, cavalry and artillery to the best effect.

In the end, unpredictability could be the best tactic

Write at the end, dedicated to each commander:

-We will continue to update the level battles, please be patient