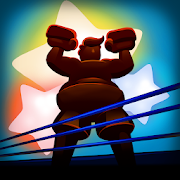 Election Year Knockout [1.0.0] updated on Wednesday September 9, 2020 is the Arcade for Android developed by Exceptionull Games

Create your own political party, lace up your boxing gloves, and punch your way to the White House in Election Year Knockout! In a country torn apart by its political divide, the nation has resorted to boxing to settle its differences. Fight your way through hilarious political opponents before squaring off with president Donald Thump himself!

Election Year Knockout is like a White House Correspondents dinner with boxing gloves, uppercuts, and haymakers! The game hits both sides of the aisle hard, picking on Democrats and Republicans. Unwind after voting in your local primary, caucus, or the general election and give your favorite (or least favorite) politician an uppercut to the face!

I was pleasantly surprised to find that Knockout looks to be a polished, suitably ridiculous arcade boxing game. – Pocket Gamer

Beat them all and become president!
Fight political parody figures including Jab Bush, Uncle Joe, and Birdie Sanders. Maybe you even have what it takes to reach the White House and take on the leader of the nation, Donald Thump! Each opponent presents a unique challenge with their own strengths and weaknesses.

Dozens of challenging bonus missions
The game doesn’t end after beating an opponent in the ring. Optional bonus missions will keep political pugilists interested for hours. Can you beat Jab Bush with a single punch or counter Donald Thump’s Stormy Smash with a haymaker three times in a single round?

Boost your way to the presidency
Politicians never fight fair, and neither should you! Unlock powerful boosts like Cup of Filibuster that will allow you to punch almost forever. The veto boost allows you to make one final stand, but be careful! You can only use it once per match.

Added a new boost! “Mudslinger” makes you stronger with every punch, but don’t get hit!

Added links to Election Year Knockout on social media. Come hang out with us!

Added the ability to take screenshots from the pause menu!