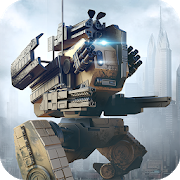 WWR: World of Warfare Robots [3.22.6] updated on Wednesday October 7, 2020 is the Action for Android developed by Extreme Developers

A host of combat robots are waiting for you!
Ship’s log, entry X-137 – current date is the year 2156 A.D. War.
The war is unchanging; only the weapons change.
Progress has enabled the creation of piloted robotic fighting machines, mecs.
The robots have devastating fighting power that can reduce the enemy’s number to zero in the shortest time possible. But no robot amounts to beans without a pilot!
Your time has arrived, soldier! Victory or defeat now depends entirely on you!

Do not imagine that your enemies will be an easy mission.
Difficult decisions, cunning maneuvers and tactical ploys await you! But remember: the most formidable enemy is you yourself!

Modernize your robot, increase its fire-power. Become your enemy’s worst nightmare! Earn the highest score on the battlefield! Invite your friends and fight alongside them!

Features:
• Dynamic battles and nonstop action that never lets you catch your breath
• Modern 3D graphics!
• Various upgrade modules
• Lots of camouflage and decal types
• Intuitive controls that will be appreciated by novices and hardcore gamers alike
• Community chat that allows you to to talk to players from the same country

Join our fan communities :
• Stay up to day on the latest updates!
• Compete in tournaments and take first place on the leaderboard!
• Earn all the rewards and share your achievements with your friends on Facebook

We are glad to tell you about update!

* Ammunition display in the hangar