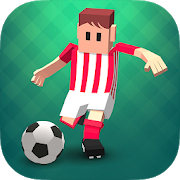 Become the world’s ultimate Striker in Tiny Striker: World Football! From the makers of the smash hit Tiny Sports series.

Join your Tiny Striker as they go pro, rising from the lowest leagues. It is your job to train and craft your Striker to compete against soccer clubs, across many divisions, to become the ultimate champion.

Can you compete on the world stage? Rank up your Striker Level and transfer to other worldwide teams in up to 5 countries, each with their own 2-tier league fixtures with a world cup to earn in each of them.

FEATURES:
+ Flick to kick your soccer ball
+ Curl or lob your shot around defenders
+ Choose your English league starting team
+ Battle through many soccer leagues
+ Train your Striker to boost their core skills
+ Transfer to 5 other countries, teams and leagues
+ Play against the world’s best teams in the UK, Spain, France, Germany, Italy and the Netherlands
+ Attract up to 30 sponsors and improve your earning potential
+ Work alongside your soccer manager to advance your career
+ Capture and share your match highlights to social media
+ View match highlights recorded by other players

The Tiny Sports series has had over 2 MILLION downloads. The original Tiny Striker game was a top 10 sports game in 22 countries and it even reached the dizzy heights of #1 free game in Ireland.

Need help or just want to tell us how to make the game even better? Get in touch and let us know.

Thanks for playing and please leave us your feedback in an app review.