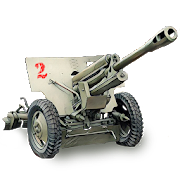 Description of One man is The Man 2 - Artillery Battle War [1.1]

One man is The Man 2 - Artillery Battle War [1.1] updated on Friday October 30, 2020 is the Simulation for Android developed by Ilya Yashin

The second part of the popular game One in the Warrior field.

One in the field warrior is an artillery simulator, impregnated with the spirit of the history of World War II.

The new version improves the behavior of enemies.
Added new types of equipment (moto technology, artillery).
A new system of damage to tanks (added incendiary and a burst of ammunition).
The chance of breaking through and ricochet depends on the angle of the projectile’s impact.
New combat missions.
Improved graphics.
And not only.

If the game hangs on the download. Enable recording on the device. !!!

Go to the front, use competent tactics and win!