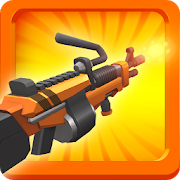 *Thanks for 1M players that has played Galaxy Gunner*

Let’s have a crack at an alien shooting game combined with survival theme.
You are a space engineer who trapped on a distant planet with your dog. When things couldn’t get any worse, alien creatures come out from nowhere kidnapping your four-legs friend. Now you need to stand up to take back your cute pet from aggressive unknown alien tsunami and their alien bosses, with support of variety of awesome weapons which can be obtained throughout the campaign by opening loot boxes or completing challenges. You, the Galaxy Gunner vs Alien – who would be the last man standing? Survival is in your hand.
On your adventure to rescue your pet, there are endless waves of alien enemies and they will overwhelm you with number. However, there are over 20 different awesome guns that can help deal with these aliens. Take your gun and shoot ‘em up!
You have to fight and shoot alone without anyone else’ support. You want to win? Seek each alien’ weaknesses and shoot aliens as much as possible!

Galaxy Gunner will bring back first person shooting experience with cartoonist design which is without blood nor mature violent element. It is kid friendly and suitable for everyone.

Galaxy Gunner will feature:
1.LAST MAN STANDING SHOOTING STYLE:
Use everything that you have to defend yourself from alien enemies and be the last man standing for survival in the space.

2. WELL-DESIGNED ALIEN ENEMIES:
In both visual appeal and gameplay mechanic. Alien minions and bosses will have their own unique designs and weaknesses.

3. BIG ARSENAL:
Over 20 guns and many power-ups that help you overcome any challenge.

4. GAMEPLAY THAT SUITABLE FOR EVERYONE:
Developed with a “Easy to play, but hard to master” mindset. Galaxy Gunner does not require you to possess a sniper shooting skill in the beginning to be able to play, but it does have increasing challenges throughout the campaign. After conquering each level, valuable rewards are waiting ahead.

5. FUNNY AND RELAXING ELEMENTS THAT BALANCE OVERALL EXPERIENCE:
Inspired by Dead Target but with hilarious alien enemies, weird weapons like crocodile gun, vacuum cleaner; these stuffs would make you unable to take your eyes off.