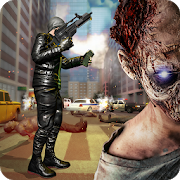 Subway zombie attack 3d is one of the top dead warfare zombie shooting games. This game belongs to the league of top FPS zombie survival games and zombie shooting games with gun! Your targets are very clear shoot the dead men of dead ahead zombie warfare offline. If you want to be a one of post zombie Apocalypse survival than fight for life for the sake of you and the humanity. Don’t let these Dead man’s invade in your world. Don’t afraid to Download FREE zombie shooting game and fight against these dead man’s. Don’t be scare they are just a living dead. Some chemical reactions made these dead triggers. Kill them before they make end of the world. Be safe while attacking these monsters. They can smell fresh blood.

Select your best agent, Each agent provided one 9mm pistol and one AK47 or M 16 guns. Guns has more hitting range and effectiveness than pistol. When you aim on zombies auto firing starts and kill the zombie. Ammunition and time is limited to complete the mission. Play the FPS zombie action games play online games or offline games. Shoot zombies til death. In first chapter missions are set for survivals fight with dead army agents can dance and make it funniest free zombie games. In 2nd chapter main objective is to find the antidotes which Dr. parker and Dr. R split in 4 parts with his bad guys. Those bad boys have taken some antidotes therefore these zombies become zombie army for these goons. So you have to fight against them as they have AK 47 too. Maps will be explored in some mission to find your way to Dr. assistants and kill them. Some missions have trains but to operate trains you have to save the train driver to drive the train. Remember not let the generator turns off as Zombies hunts human more quickly.

• 4 agents each have more powerful guns

• Bonus points will get on each zombie killing