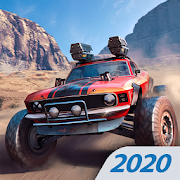 Got tired from heavy tanks and giant robots? Hurry to download ☠️Steel Rage🤖, online combat cars shooter wargame! Fight players from all over the world in new FREE PvP shooter with mech cars. Choose machine, chassis, combat weapons, abilities and blitz into battle. Upgrade and customize your machines according to your taste and combat style. Be a champion of the PvP shooter wargame!

🛠️Full customization
Choose vehicle body, chassis, military weapons and action abilities which suits your combat style. Add some colors and camouflage to make your metal monster more stylish. Make fast sport action car, armored machine or mech robot. All is up to you!

🚓Tons of auto bodies
More than 13 bodies with unique action specifications and appearances to cross enemies out in twisted rage. From sedan, mini and sport cars to muscle, SUV and vans.

🏎Chassis for any driving style
Select different chassis for any machine you have. Use sport suspension to improve speed, SUV suspension or even 6 wheels chassis to get off-road capability, or select tank tracks and steel robotic spider limbs to increase maneuverability.

🔮Tactic abilities
Complete your mech monster with unique action abilities. Wear energy shield for better defense, use nitro boost for tactical maneuvers, or become invisible to attack from ambush or to make a tactical retreat. Use abilities in the right time to change the tide of battle and cross enemies out from PvP arena!

🛠Lots of tactical opportunities
Mount up to 3 different guns and make a salvo from all of them or use tactics and fire any of them in the right time. Protect yourself with energy shield and blitz enemies with a barrage of machine-guns and AP shells. Launch missiles from cover and use invisibility to hide yourself. Or use nitro boost to quickly outflank enemies.

🌎Enormous arenas
Vast territories for exploration and maneuvers, from countryside to city. Explore magnificent arenas and use terrain, buildings and other covers for tactical advantage. Make sure enemies won’t have any chances!

⚔️Full-scale warfare
Up to 30 war machines in every match. Dynamic 6v6 battles. Even more variety of combat and tactics makes every match unique!

📡Online PvP
Fight in breathtaking battles with champions from all over the world! Be the best fighter with the coolest steel mech and cross enemies out of leaderboards!

⚙️Freedom of experiments
Test different builds until you find your own. Fight with other players everywhere and every time whenever possible! The game doesn’t have energy or other restrictions!

🕹Easy controls
Intuitive controls, which you can change in the settings and handy UI will let your mech to join a combat immediately!

📱Tweak graphics
Want the game to run even on weak device? Pick the graphic set which suit your metal knight best!

🚜🔥⚔Online action car shooter! Choose a mech of your own style, upgrade and customize it and cross out enemies from all over the world without any restrictions! Regular updates and new content are waiting for fighters in online wargame of 2019!

Not sure what to play? Join online twisted PvP in ☠️Steel Rage🤖, download for free right now!

Note:
Dear users! We are constantly working on creating new content, improving the wargame, graphics and optimization! Please write to us if you find bugs or issues.

👨🏽👳🏽🎅🏽Want to ask about the game or find friends and allies?
Facebook: www.facebook.com/GDCompanyGames
Support: [email protected]