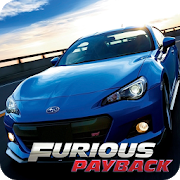 Note: THIS IS NOT AN OFFICIAL FF GAME.
Furious Payback is sequel of Best Car games of 2106-2017.
Furious Payback has a single player campaign and real online racing that follows the exploits of former street racer Brian. After being double-crossed and forced into exile, it’s time for Payback. Brian must rebuild the crew from Furious and Fast Team, win an impossible race and bring down The House, Jump and move fast to win and the cartel that has a grip over the city’s casinos, Takedown criminals and cops. No need for limit speed.

It’s not going to be easy though. Brian and the crew will find themselves in the middle of some of the most action-packed, explosive events in Furious history for Speed and No Limit of Underground Racing.

Many Cars to drive in Fast & more Furious Payback Racing with different drive missions like, Street Race, Time Trial, Cop Smash, Car Deliver and most awaited Drag Races , Now for the fun part, where you turn it up a notch and take your stock ride into something spectacular. Visually customize your ride to get it looking just how you want, and your garage has never looked better. But deep down we know it’s what’s under the hood that counts; win and buy the hottest aftermarket parts and craft the perfect driving machine.
Double down on risk to run up your rewards. Nail speed and style moments to bank extra rep, and string together Heaters for massive multipliers. Push your limits to bank your winnings, or will you go bust? Up the ante with challenges that raise the stakes in races. Win the race and the challenge to multiply your bank. Get on the Tokyo Racing and use the nitro to drive as fast and as furious as you can in 15 super cars! Enjoy the advanced physics engine with incredible physics behavior and graphics.

—- About Gameplay:
Drive Furious 9 Turbo Cars with extremely Fast and also Fate of the furious 8 Cars, beautiful cars on Exotic tracks. Start your career, win enough races and buy new cars to compete in more demanding races.
Start driving in unique cars – never seen before on the asphalt roads in reality and computer games.
Tune & Upgrade
Buy car parts (Top speed, Drag Race, Drift Race, acceleration and durability) and upgrade your car. Customize your auto and adjust to your driving style. Doesn’t matter if you like high top speed or pure acceleration – you can modify your car and win races in your own style. Choose which car do do you prefer and buy the one from your dreams – respray the body, mount new engine, improve acceleration and nitro. Become the fastest driver in the city and earn respect from other teams. Show them who is the real car racer.

UPDATES:
Game will be updated on regular basis, new features, cars and tracks will be added regularly

Stay with us for Updates and Suggestion, Like our page for quick response!
https://www.facebook.com/HammerheadGames92/