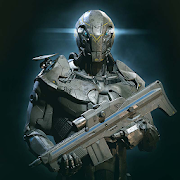 Zombie Shooter World Star War Battle Gun 3D FPS is new intense 3D first person action sniper shooter game FPS where you shoot monsters with overkill. Singleplayer campaign mission consists of simple task, which is to eliminate all monsters from level. You can configure graphics to fit your device, so you can play more smootly and your movement will be more fluent. After each finished gore game, you gain experience ( xp ) and bounty money. Blast your enemies with an MP5, AK47, Desert Eagle, FN SCAR, HK 416, grenades and many more shotguns and rifles. Realistic outdoor hd graphics is compareable to visuals of AAA assault army games from high-end PC. Game contains dangerous singleplayer. You can pick from arsenal of weapons – army knife, chainsaw, RPG, sniper gun, m4 rifle, grenade, uzi. This game was made on unity engine. Each class contains main weapon, but you can also buy / upgrade other weapons, ammo, armor and bullets to the primal gun.

Kill them before they kill you! Grab your shotgun in arsenal and shoot your way through this monster war of gory main levels to rescue the world from the monster apocalypse. The monsters must be eliminated. Keep your finger on the trigger. Become the best ruthless online hero assassin who will lead headshot leaderboards ranks in this memorable stellar game with unique feel. Dive in to the new gaming experience with hours of not ordinary gameplay.

Every game you gain skills, that will help you to achieve desirable victory. After you die, you will return to the war frontline battlefield, so you won’t be pernamently dead. You can avenge yourself and gunshot surviving killer monster with critical damage.

You are one of the scientist on the orbital space base who discovering and examines new organism from new planet. But on the base will happened accident and you need to evacuate to the planet by a spaceship. When you land on the planet your quest will be seaching for parts of mechanism to fix your spaceship example or search for thread from other races of aliens. Look for survivors and other human bases.

You realize that you are not alone. Later on you realize that Earth’s last hope is in your hands, take a control of new prototype outlanders guns and use it against to them to protect Earth from alien swarms.

You will learn how to use old fashioned guns and modern laser machine guns in this unique FPS. Search for spacesuit, recharge your shields, collect ammo and fight from primitve creatures to very intelligent and developed outlanders. You need to make sure that invaders will not attack Earth before they get there. Stop this war before they will get closer to our star called Sun.