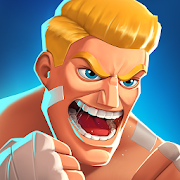 You are given many different defenses and attack techniques to help you such as punching, kicking, grabbing, throwing, and jumping. Use quick reflexes and special moves, unleash hard fist punches, hit perfect kicks and combos, beat all opponents and become the best kung fu fighter. It’s up to you to punch, kick, smash and knock them all out. They are powerful street fighters, so don’t underestimate them!

Unleash the fist of fury with kung fu style attacks. Collect coins and gems like a superhero by defeating the street gangs and their unique bosses to upgrade your character skills to become as strong as a superhero.

⚔️Awesome Weapons
Pick up different types of weapons while you fight your way through gangs and bosses on city streets. Weapons such as grenade, axe, pistols, knife, hammer, machete, crowbar and many more!

🔥Tons of Characters & upgrades
Lots of characters with strong street fighting and martial art skills to choose from with different moves and animations! Upgrade them and make them as strong as a superhero!

😈Unique City Gangs & Boss Fights
Rage & fight against different enemy gangs and their bosses of city streets. Each enemy has its own special skill and different look, each boss is unique and they have their special powers and unique fighting moves! Fight and defeat them all and save the city!

💰Get Rewarded
Play every day to get your daily login bonus and other multiple bonuses, win multiple rewards as you complete levels and defeat the enemies!

Defeat the bad guys and be a virtual superhero of the streets! What are you waiting for? the bad guys have already started taking over the city! Let’s fight and defeat them!
Download “Rage City: Streets of Gang Fighting & Fury Fighter” Now for free!