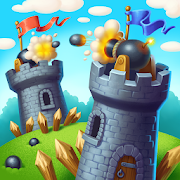 Tower Crush is an epic indie game where you build 1 tower, up to 6 floors, load them with weapons, upgrade, evolve and defeat your opponents in fantastic battles. A combination of action and strategy!

If you like tower defense games and shooting games, you will love Tower Crush.
You can also play the PVP (Player vs Player) mode in this real-time multiplayer game.

Fierce Tower Warlords, time to fight!
Build your tower, arm yourself and crush your enemies! For honor and glory!