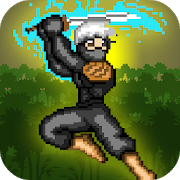 Dragon Scroll [1.4.8] updated on Friday November 13, 2020 is the Action for Android developed by KingitApps

Play as a main character in the Dragon Scroll. Run, jump and slash your way through a vast world of platforming challenges and embark on an epic adventure! The mobile hack and slash adventure game and a 2 dimension pixel platformer, now also available for Android phones and tablets.Experience the adventure to stand against darkness and bring back the peace and serenity that once was.

You have to take back all the scrolls hat have been taken by the betrayal. The story in a Dragon Scroll begin in a kingdom in a peaceful, blissful and beautiful land far far away named Earlandia, people were living comfortable lives in peace and harmony under the reign of the most respected and powerful clan called Yuchie’s clan

Until one night there came a deadly storm and suddenly turned into chaos, some of the people of the clan have been tragically killed and some of them ran to the mountain to protect thrmselves. They had been attacked by someone they knew and have once been the greatest heroes of their own clan called HAKURANATA.

The only way to regain the Yuchie’s clan honor is to find all the scrolls and the Dragon Scroll back. Luckily, there was one young shinobi not in the land of Earlandia at the time of the incident and the person is you.

If you enjoyed those classic hack and slash platformer Dragon Scroll games, then you’re going to love this. Forget to connect or search for your old consoles, you will be able to revive the nostalgic childhood memories on your Android device!

Play With The Most Fearless Adventurer, Be The Hero, and Join The Quest To Save The Kingdom!
Our old retro style addicting game will be now one of your top favorite free adventure games. As we want to keep the vintage style platformer, you need internet connection to play.

A GREAT ADVENTURE
# Explore a magical realm of dungeon, mountains, treasures and monsters.
# Lots of dark environments and monsters.

* Add instructions for use ability and new weapon