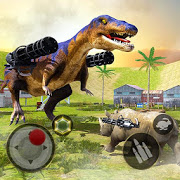 Animal Royale [Varies with device] updated on Friday November 13, 2020 is the Action for Android developed by Glad Games

Animal Battle Royale is all new gunfire and surviving simulation game with a multiplayer game-play. Immerse yourself in diverse 3D environments to hunt the most dangerous wild animals and experience the best shooting ever. Eliminate all the competitors on your way to move on to the next challenging level.

Upgrade to most ferocious animals like Cheetah, Hyena, Bear, Buffalo, Zebra, Wolf, Dalmatian, Hippo, Tiger, Raptor, Giraffe, German shepherd, Rhino, Deinonychus at various levels. Use your earned coins to buy the Robust Shield to protect yourself and survive the wildness till the end in Animal Battle Royale game.

This is an incredible and addictive action and shooting game which takes you to a thrilling world of most realistic environments like Forest, Snow, and Desert of the Animal Battle Royale. The smashing sound effects add excitement to this new 3D shooting game.

So, what are you waiting for! Become an expert shooter with our Animal Battle Royale!

Wild animals out there to hunt
War among different animals
Realistic sound effects
15 mission to complete
Kill before they attack you
Environments: Forest, Snow, and Desert.