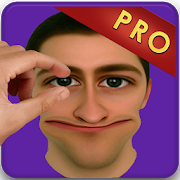 Photo Deformer is a unique photo editing utility gives users the power to create caricature and crazy photos they want all for their recreation!

It’s has never been more easy to create hilarious caricature out of your friends’ photos, just choose the photo you’d like to transform – Photo Deformer automatically detects face and its parts offering possibility to create a perfect caricature in one tap.
All you’ll need to take is a minute out of your day!

Users are also able to choose Manual mode to modify and create caricatures in even more advanced and sophisticated way.

An innovative new recreational photo editing app, Photo Deformer has everything users need to mix, match and create funny photos whenever they want, and for whatever reason they can come up with!

The app itself is incredibly easy and intuitive to use, users simply pick the picture they want to change and Photo Deformer does most of the legwork. The app is easy to navigate, and includes a full user manual for novice photo changers as well.

Once photo is done users can share their creations with friends and family via Facebook, MMS or via email too!

Whether you want to modify your photos and create crazy caricatures Photo Deformer lets you do everything with no limits at all, Photo Deformer is the photo-changing photo app that puts hilarious photo mashing action right at your fingertips!

✔ 7 deformation tools, each can be applied with 3 sizes

✔ Save deformations with different names

✔ Save deformations as animated GIF

Photo Deformer Pro is the Ad-free premium version with no distracting advertisement.

Please feel free to contact us at any time and send with your suggestions or claims to our support email.
We try to do our best to answer to your comments as soon as possible.