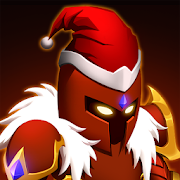 🏆 Premium feature: Unlock all 4 characters including the fan-favourite Crimson!
🎯 Note: This is a stand-alone game. You cannot transfer your data from the free version to the paid version.

Knight War: Idle Defense is fantastic roleplaying game with both action and idle game elements. Download now for free to fight with giant monsters and defend your kingdom!

Time of battle is back. Your kingdom is on a thin thread with the attack of hordes of enemies. Stand up, brave knights! The destiny of the kingdom lies in your hands. Train your skills, gather your squad and search for precious materials to form the strongest army to survive in nonstop battles.

Features of Knight War: Idle Defense:
– Idle stress-free action gameplay: A hero RPG ideal for playing on the go.
– Auto System: You do not need to struggle in fighting monsters only but have more time focusing on other features in the game.
– Rich game mechanics: Smash enemies with melee attacks or remote attacks with arrows, or destroy all with magic.
– Diverse weapons and craft system: You can search for materials, create new weapons or unique items that make your strength superior and defeat your opponents.
– Upgrade your idle knight to fight better in this action offline defense game!
– Discover new abilities for your knight to unleash epic action skills in battle. Your idle RPG experience will never be better!
– Epic battles with various enemies and giant bosses.

Knight War: Idle Defense, a fun and simple action RPG with just one thumb. Let’s join the game and become united the strongest knight of the kingdom.

🏆 Premium feature: Unlock all 4 characters including the fan-favourite Crimson!

🎯 Note: This is a stand-alone game. You cannot transfer your data from the free version to the paid version.