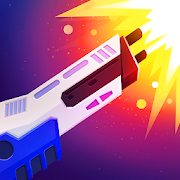 Shooting Robot: Run and Gun [1.0.8] updated on Thursday November 19, 2020 is the Action for Android developed by Pick games

Do you like shoot and run games? Fight with evil: try to shoot at the enemy robots on a variety of maps!
Keep an eye out – each type of opponents has its own guns and features. Upgrade your robot! Drop-down random skills, perks and improvements help to prevail in the battle. Cool enough to deal with ordinary robot gunners? Bosses are waiting for you – they are robots of enormous sizes! The portal to the new level will open only after you defeat all the enemies on the current one. Auto shooter with many levels, try to go through them all!
This non stop shooting game is easy to control. Use the swipe on the screen to move around the level. When you stop, the robot begin to attack the nearest target.
To shoot a bow like an archer in arrow game is too old-fashioned, it’s much cooler to control a gun robot!
Scroll shooter with cool graphics and various enemies allow you to become a real run and gun hero!