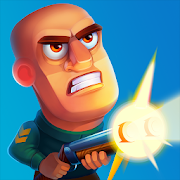 You are Don and you kill the walking dead.

– Fight for your survival in a zombie apocalypse with this classic action shooter.
– Choose from an arsenal of combat weapons.
– Make upgrades, earn money and battle against the hoards of zombies in terrifying environments.
– Watch out, horrifying boss creatures are stalking through the darkness!

Load your guns and unleash vengeance upon the army of brain eaters.

Hey everyone, Beta 17 is here. Sorry for resetting the progress... again.

* We've added many more zombie traps across the levels

* Made the game a bit easier in the beginning

* Fixed resolution on Galaxy Tab A