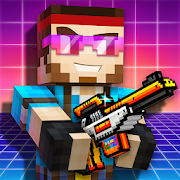 This is Pixel Gun, a 3D First Person Shooter! Shooting games in cube (block) graphics where skill is everything. No auto shoot, no auto-scope! Jump, fly, fire, use fighting pets. Create as many skins as you like for free. Mine gems and coins and craft tons of stuff: buildings, decors, backgrounds and a whole lot more.
You can choose from multiple FPS modes: offline campaign with Pixelman, Battle Royale, Flag capture, team battles online or one-on-one duels.
Fast multiplayer and high FPS is guaranteed.

- A breathtaking event, soaked in blinding neon lights and electric sounds. Be careful, retro-wave is addictive

- Fighting or shooter? In the new lottery you’ll find items for the enthusiasts of both