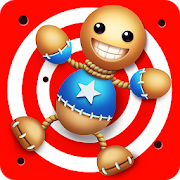 Description of Kick the Buddy [Varies with device]

Kick the Buddy [Varies with device] updated on Tuesday October 6, 2020 is the Action for Android developed by Playgendary

Explode, destroy, fire, shoot, smash, freeze, send the power of the Gods and don’t even think about stopping! Man, you now have a virtually limitless arsenal to beat: rockets, grenades, automatic rifles … and even a NUCLEAR BOMB!

We present to you Kick the Buddy — it’s more than just a game! It’s a top interactive action game!

Angry at your boss?
Want to smash all around you?
Want more kicks?

STRESS RELIEF IN A SECOND!

Even if you’re a relatively stress-free person you need to blow off steam at some point!

Whats new of Kick the Buddy [Varies with device]

We are ready to make your game experience even greater! Bugs are fixed and game performance is optimized. Enjoy!