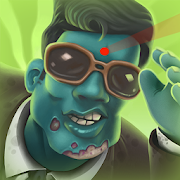 The ULTIMATE Zombie Shooter on your phone!

CLEAN UP THE CITY!

Clean up the city of Bumblefudge from the Zombie infestation, and GET RICH trying!
The Zombies are rising and they’re hungry for…CASH!?

One touch controls make you L337 right away!
Headshots not just for 360 No-Scopers!

Use ruthless A.I turrets to protect your stash…upgrade them to make them even more ruthless!
Relive every Saturday night you ever had with the Disco Gadget!
Combine abilities to create an EPIC load-out.

Power up into a SNIPER LEGEND as you activate RAGE MODE!
One-shot kills for all!

IS THAT A TRUMP?

The Zombies took over a mask factory with some controversial results…