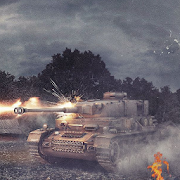 Before downloading the game,you should understand that it is made by one guy .

Panzer War is a mobile free-to-play TPS action dedicated to the epic tank battles of the MidXX(20th) century.

Attention! You can drive more than 60 tanks without any condition! Just Install the game1

With an impressive roster of over 60 massive tanks from WW1 to the cold war, stunning graphics, physics-based ballistic, and intuitive touchscreen controls, Panzer War makes it easy to jump into short, action-packed 5vs5 tank battles no matter where you are and also you can enjoy the battle with bots without a network.

A truly free-to-play game!!! No technology tree, timers, energy bars, fuel—play as much as you want and whenever you want.

In the recent ‘Cold War’ update, many new mechanics have been added to the game.

Halftrack and wheel tanks have also been added to the game.
Be Sure to try the real Germany Panzer – SdKfz 234 “Puma”!

And for RTS lovers, there is also a feast waiting for you in the game. Try the Fury mission. Being the command of a USA armored force, and taking control of 4 Sherman against the dangerous Germany Tiger.

The training ground supports the placement of vehicles.

Improve the logic of AI to make the performance more natural.