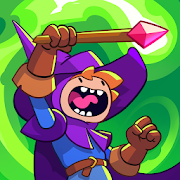 Wizard Mike [1.0.10] updated on Tuesday June 9, 2020 is the Action for Android developed by Simplicity Games

Darkness came over magical kingdom. The most powerful wizards stood against evil forces. But the enemy was too strong. The battle was lost.
Mike didn’t fight in battle. Mike had his own special assignment – sweeping the campside. It saved him.

Is magical kingdom doomed, having only Wizard Mike as its protector? Yes. Most likely.
But there’s a chance, small one but still – Mike might not be the smartest guy in the room. Maybe he failed alchemy classes 17 times in a row. Maybe he almost destroyed the entire University of Magic causing explosion during the potions class. But he doesn’t lack self confidence! He just needs your help. Guide him through the battle with evil forces and save the kingdom!

Wizard Mike is insanely addictive logic game.
– Avoid traps set by your enemies
– Use all your brain power to solve puzzles
– Use your magic wand to get rid of the enemies!

But the enemies aren’t stupid (they only look like that) and they defend themselves as much as they can – you must use your brain and also logic to pass all levels of this cool adventure game. On your way you will run into various obstacles – bombs, traps or even… knights – but remember that every weapon can be double-edged sword.

Also keep in mind that you are not alone in this war – you have your brave wand at your service, which can turn your opponents into dust. In some levels you will appreciate your Magic Potion Travel Kit.

Mike is still teenager so he care about his look and fashion style – you have a ton of clothes, hats and even wings to change style of your cool wizard to even cooler wee-zharrd. This could help you to shock your opponents even before the battle!