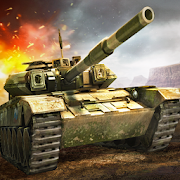 Collect and upgrade tanks with various special abilities through battles.
Fight against users from all over the world and aim for the world’s best team to win the battle.

How to play
-The battle begins right after the game starts.
-Avoid attacks from opposing tanks and destroy them.
-Destroy the opponent’s Main Base to win the game.
-Even if your tank is destroyed, you can fight again after 5 seconds.
-Take advantage of items found throughout the battlefield.

Battle tank2 is completely free to play.
Download it now!