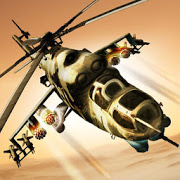 Air War - Helicopter Shooting [Varies with device] updated on Monday August 10, 2020 is the Action for Android developed by Timuz Games

In Air War – Helicopter Shooting, you can fulfill your dream to be a pilot and engage in challenging air combat missions. Here you can fight against your enemies in dramatic 3D air battles, experience the detailed environment of the battlefields, explore thrilling missions and dive into the devastating helicopter battle action.

Fly some of the modern gunships to take part in ruthless air-to-air and air-to-ground firepower. Embark on a mission that requires all your flying skills! Take part in all sorts of missions & tasks to increase your power and collect fantastic rewards.
If you love playing shooting games, then this is the best game for you as you can find yourself whirling through the skies across powerful crossfire. Come on! Take one of your gunships under direct control and show them who’s boss.