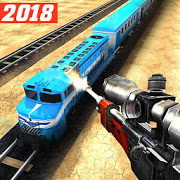 Sniper 3D : Train Shooting Game : Make the best sniping strategy to destroy your enemies in this snipers mission! As this Americans sniper trains acts like rail shooter and eliminate each and every enemy by targeting and shoot them. It’s time to show some ultimate sniping skills. Many challenges are waiting for you as you attack enemy on a moving train.

Fulfill US transportation duty that require protection from terrorist attack. This unique concept of trains SHOOTING game for free on moving trains makes it most addictive and thrilling free shooters games. Let not your energy level down during the attack against the invasion. Get hold of your long range snipers rifle, Set your aim and pull the trigger to destroy your enemy. Make sure you keep yourself well focused and determined before firing your first shot. Please be careful and look around to prevent the enemies from SHOOTING on you.

Experience the thrill of being in a highly classified sniping mission and assassinate the enemies with your rifles! Action and thrill will let you master the elite sniper-skills. Become best Americans snipers hero in this modern combat with criminals. So Download this “Sniper 3D : Train Shooting Game ” game & enjoy a challenging & entertaining shooting 3d game play!