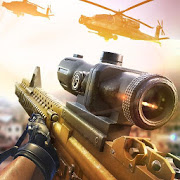 FPS Shooter 3D is an all new first person shooter where you play as an agent. Your only aim is to complete the tasks in the mission given to you. Then feel free to step into the thrilling solo play campaign as you shoot your way through one dire situation after another to save the world as you launch an attack. Two teams fight against each other, with individual players working their own way through the weapons in FPS Shooter 3D. Gear Up! Choose from Solo Mode or Group Mode where you can upgrade 5 of your teammates to help you make the kills. Accumulate XP and level up by playing both solo play missions and group play matches. Make each bullet count!

While playing, you will learn new mechanics and gain knowledge, allowing you to evolve as a player. Explore 3 breathtaking themes like Factory, Snow and Desert. Great graphics, music and voice performances perfectly adapted for a first person shooter game. Choose from over 25 options of robot teammates that have all unique skills to use. Join our vibrant thematic 3D scenes and gain a reputation for you and your partners. Intuitive, highly customization of controls so you can explore the game just the way you want. Don’t forget to use the Revive option to get a second chance. Regular updates improve game play performance, unlock new game modes, features and skins to personalize the experience for you as a player.