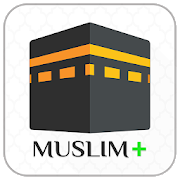 Muslim+ is one of the top popular Muslim app.

Muslims around the world uses the app for most accurate prayer time and Quran with native translation, Arabic scripts, and audio recitation. Muslim+ contains Qibla location, an Islamic hijri calendar, Tasbih, Supplication.
All in one Muslim+ app which can be use as all in one as its contain Al Quran, Prayer Times (Salat times), Supplication, Qibla compass, Tasbih, Duas and also Important days.
Best app for Muslim Religion and Religious.

MAIN FEATURES:
• Accurate prayer times based on your current location offline.
• Fasting times (Imsak / Sahri and Iftar) during Ramadan.
• The Holy Quran (Al Qur’an) with audio recitations (mp3), phonetics and translations
• “Tasbih” to count your dhikr/ Zikir.
• Animated Qibla compass and map to show you the direction to Mecca
• Complete Muslim Hijri calendar to estimate holy dates such as Eid-Ul-Fitr and Eid-Ul-Adha
• Hisn’ul Muslim (Fortress of the Muslim): a collection of doas and supplications)
• App and Quran fully translated to your native language.

Tasbih:
-Very useful tool when you want to recite Names of Allah or Tasbih.
-Keep tracking of Tasbih/ tasbeeh count and also calculate how many times and when you recited names of Allah.
-Nice feature and design.