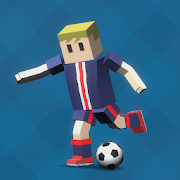 Want to be a Champion Soccer Star?

From an unknown soccer teenager to a soccer superstar, starting from the junior club in your hometown to the world’s top team, and finally leading the national team to win the world championship. All in the CHAMPION SOCCER STAR!

⚽ Drag to aim, tap to shoot, let the physics simulate a real and funny shooting.

⚽ Easy to handle, Whether you are a casual player or a soccer player, you can enjoy the game.

⚽ Thousands of clubs in the real world that you can choose. join the top teams and score the most incredible goals.

⚽ With a variety of incredible playback shots, you can enjoy your goal from all angles. You can also save your goal replay.

⚽ Challenge various cups, such as Champions League and Libertadores Cup.

⚽ You can also join the national team to win the World/Europe/América champion.

⚽ New arcade mode and freekick master mode. Let’s see what position you can get on the global leaderboard.

⚽ A new popularity/transfer system. When you perform well, some clubs will contact you, and you can choose to sign or negotiate. If you lead the national team to the world championship, you will gain huge popularity and have the opportunity to be favored by the top clubs.

⚽ We have customized the physics engine so that it can simulate the movement of the ball more accurately and naturally. When you hit the right place of the ball, it will draw a beautiful curve in the air.

⚽ You can customize your character, including jerseys, sneakers, numbers, skin color, hairstyles, etc.

⚽ The goalkeeper has an amazing AI. He will determine the direction and landing point of the ball in advance, and use the most appropriate save action to block your shot. When you face a world-class goalkeeper, your shooting skills will be tested the most.

⚽ Simulate the career of a soccer player.

⚽ Lots of achivements to unlock.

⚽ Completely based on physical simulation, whether it is passing or shooting, it will bring you a real and interesting experience.

⚽ Many countries and their leagues can choose, such as Brazil, Argentina, Spain, Italy, Britain, Germany, France, Russia, the United States, South Korea, etc.

* Multiple game data slots. It's time to create a new career. (you can find it in settings)

* Some clubs will pay the liquidated damages for you.