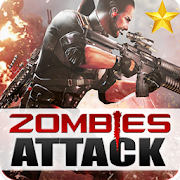 Once beautiful city now lies in ruins and is flooded with starving zombies and undead creatures. You ended up all alone with a very simple mission - do your best to survive or die trying! Hordes of zombies will run at you from every direction, so keep your aim steady and try not to run out of ammo, as there is a Boss fight waiting for you at the end!

Perfect your shooting skills and survival instincts, master head shots for instant kills, upgrade your weapons, buy new armour and ammo - get ready to clear the city from undead menace!

💥 Post-apocalyptic zombie-shooting FPS at its finest

💥 Huge variety of enemies, new deadly beasts and monstrous Bosses on each level

💥 Dozens of quests to complete for reward

The world is in danger: a deadly virus is infecting a growing number of new territories, turning people into undead zombies.

Dead plague pandemic rising and doom day approaches, don’t recoil in horror and fight this unkilled nightmare! USA and the world are not like we remember them to be, you find yourself in abandoned city blocks, cars are on fire, all your neighbours are dead, no friends to rely on, you are the final frontier in this war against walking dead! It is you versus the Death itself, preserving life is you ultimate mission!

Fight for survival in this zombie apocalypse shooting games. Choose the best gun to fight against undead running at you from everywhere and also don't forget about defense. Kill all the dead and don't leave any zombies alive!! Are you ready for all the action and adventure in this awesome shooter game? If you don’t want to become a deadman really fast, try your best shooting and killing in this wonderful zombie shooting games!

⭐⭐⭐⭐⭐ - 5 star rated game by thousands of players around the world!

🕹️ 🕹️ 🕹️ It's not your average zombie against plants, pixel kind of game or any of those royale games out there - it's a hardcore offline do or die warfare battle! Zombies ate your friends and now they want to eat you, so get ready to kill them all and save yourself from death!

💥 💥 💥 Be a zombie hunter people desperately need, you are their last hope, this dying world deserves a hero, so go through all the challenges on your way and maybe you'll be able to save the human race from extinction!

🧠 🧠 🧠 Use your brains, don't lose them! The rising dead won't make it easy for you! So you just protect yourself until last zombie gets his bullet. Zombies are getting more crowded and dangerous with each new level, they even get sneaky zombie dogs! 🐶 🐶 🐶 So the only chance for you is to improve your skills, weapon and gear to stay alive. Stop the dead by head shot to save your bullets - It's easy to shoot, impossible to stop! 🔫 🔫 🔫

💣 Real zombie carnage, lots of undead to fight at the same time

💣 Earn money for killing zombies and medals for completing levels

💣 Smart upgrade system for your weapon and gear

💣 Perfect head shots for instant kills, save your time and ammo

We would like to thank everyone for help and support, all of you guys who installed this game. Your help allow us to continue developing and creating new, great games! Your feedback, comments and suggestions are very important to us!